This is the fourth post in a series describing the construction of a bass guitar. This is a project that my son and I took on when he stumbled into the opportunity to purchase a Jackson Bass Guitar body and neck for a pretty good price.

At this point, all the construction tasks had been completed.

We strung up the guitar using the strings that I had purchased from one of the Sam Ash trips. Actually, putting the strings on the bass is easier than stringing the other guitars. Probably because bass strings are thicker and easier to handle.

The first thing that we noticed was a terrible buzz on every string. No surprise really. I suspected that we’d have to adjust the relief of the neck. If you’re not familiar with what I’m talking about, most guitar necks are not straight. They have a little bow in them and this is called the relief. If you hold the guitar in playing position and sight down the neck, you’ll typically see bowing one way or another. In our case, the neck had a sever back-bow which was causing the strings to not have enough clearance above the frets. So when the strings were struck, they bounced off the frets causing a buzzing noise.

The obvious solution was to correct the bowing and most guitars have a metal rod, called the truss rod, through the neck that is used to make this adjustment. This is where the next trouble-spot of this project occurred. The truss-rod nut on this guitar was sitting in a little pocket that was cut into the head stock. 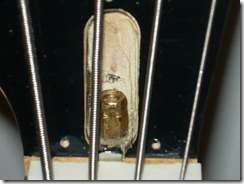 None of my sockets would fit within the pocket so that I could adjust the nut. I went to Lowes and bought a socket and extension that I thought would work. You can probably guess that it didn’t. I even removed the neck and took it to Lowes. Still no luck.

I knew we really needed a 9/32 inch barrel wrench so we went to Guitar Center. They didn’t have anything. We were close at Sam Ash. They had a 5/16 inch one. So we ended up ordering one from Stewart-MacDonald.

Once we received the wrench, I was able to adjust the relief to remove the back-bow and get the action (the height of the strings above the frets) where it was comfortable for my son to play. We went from this 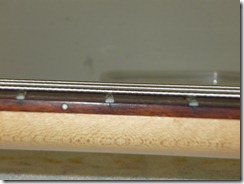 to this (sorry about the blurry picture). 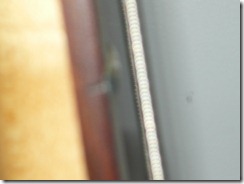 Hopefully you can see the increase in height of the string about the fret. In our case, I used the recommendation from the Fender support site. You can find them here.

With the action set, we moved on to adjusting the intonation. The intonation affects the tuning of the guitar all along the neck. The way that the neck is laid out, the open sixth string will typically be tuned to an E and fretting the sixth string at the 12th fret will also produce an E but one octave higher. Setting the intonation requires that you tune the open string, fret the string at the 12th fret and hope that you get the same note. If you don’t, you adjust the string’s saddle forward or back, depending on whether the note was sharp or flat. Moving the saddle causes the string’s length to change. You then have to retune the open string and check the tuning at the 12th fret again. You repeat this procedure for each string and it will take a long time.

The last step was to adjust the height of the pickups. Again we used the recommendation from the Fender site. This procedure was made easier by the fact that we had mounted the pickups on springs.

Finally we removed the protective wrapping from the control-cavity cover and installed the knobs on the volume and tone controls. And with that, we were done. 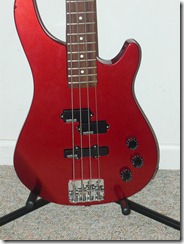 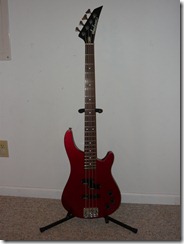 This was a great little project that I really enjoyed because it allowed me to spend some quality time with my son working on something that was important to him.

Posted by Michael Levy at 12:00 PM No comments:

and it's comment spam
Posted by Michael Levy at 8:50 PM No comments: