One of my primary goals was to stand up a Windows Home Server (WHS). This post made it clear that it was possible. Now, was it practical and would it perform on Hyper-V Server? Both valid question that I would eventually find the answer to.

I’m not going to go into the details of installing Windows Home Server. There are many articles on the web that cover that. I’m really going to concentrate on the Hyper-V aspect of the install. With that in mind, I will say that I found this WHS whitepaper helpful.

I created the VHD first. Originally I wanted to create a small drive for the system and a larger one for the data. Then I saw a couple of articles that suggested that you use your largest HD as the primary. Something about the way that WHS allocates space? I should have kept the URL of the article. (Please let me know if you find an article that explains this – thanks.). To make things simple, I created a single 500GB fixed disk. Why a fixed disk? According to this whitepaper, fixed drives offer better performance. Also, one of my main goal for WHS is to have it backup all the computers in the house. So I went big.

Next I created the VM. I walked through the wizard.  Windows Home Server doesn’t require a lot of memory. I’ve seen some articles that say you can get by with as little as 512M. I allocated 1GB RAM to the VM. I also allocated one processor. I ended up with two IDE controllers and one SCSI controller. I assigned the 500GB VHD to the SCSI controller because it performs better than the IDE controllers (see the performance whitepaper). I also configured the DVD drive to reference the physical DVD, which contained the Windows Home Server Install DVD.

After a couple of minutes, I was greeted with the message “Hard disk capable of hosting Windows Home Server was not found. Would you like to load additional storage drivers?” What the hell? How could the install not find the drive? I had no idea what driver to load. I wasn’t sure what the problem was.

I started searching the Internet for clues (Where would we be today without the Internet?) . I hit one article that discussed this very issue. According to the article, the issue is that the Windows Home Server install does not have the drivers for a SCSI drive but you can install them from a virtual floppy drive image called SCSI Shunt Driver.vfd. Unfortunately I couldn’t find it. It wasn’t on the Hyper-V Server host anywhere.

After more searching I bumped into this article. It turns out that Hyper-V Server 2008 R2 cannot boot a guest OS from a SCSI drive. The guest OS boot drive must be an IDE drive. I changed the configuration to move the VHD to the first IDE controller and restarted the VM.

The install proceeded without any more problems. 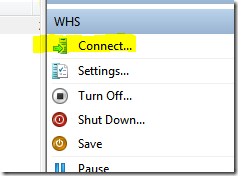 This brought up a window that is very similar to Remote Desktop.

After logging in, I was greeted with a very nice warning message of the damage that I could do by managing WHS this way. In this case, it’s safe to close the instance of Internet Explorer to expose the desktop. From the Virtual Machine Connection’s Action menu I selected Insert Integration Services Setup Disk. This loaded the virtual DVD drive with a CD image. Autoplay didn’t kick in so I had to go manually navigate to the DVD and find the setup program. In this case, I needed the version that was in the Support\x86 folder. 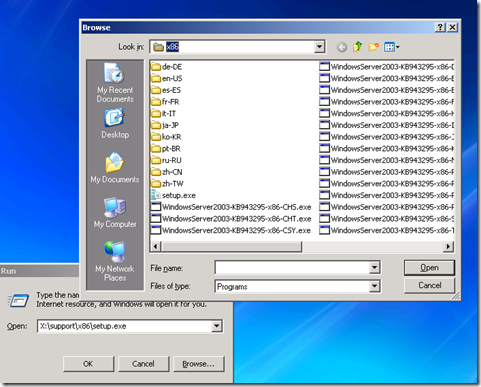 Integration with the guest is much smoother once Integrations Services is installed.

With the server install, I followed the the remainder of the Getting Started whitepaper to complete the install. I now have a Window Home Server running very smoothly and it is successfully backing up the other machines in the house. The next thing that I want to do is see how well it will stream media to the PS3.