This is the second installment of the Bass Guitar Build. If you’re just jumping in, my son and I purchased the body and neck of a Jackson Bass Guitar. It has been stripped of everything else by the previous owner so we were able to get it cheap.

In part 1, I described the work that my son and I did to repair three chips in the body. Here I’d like to continue describing the rest of the body work that we had to do.

The original control cavity cover was also missing when we purchased the guitar so I ordered a new one from Stewart-MacDonald. From the looks of it, the original was mounted straight onto the back. Since I was already working on the body, it was easy enough to route space around the control cavity so that the cover would lay flush instead of on top. 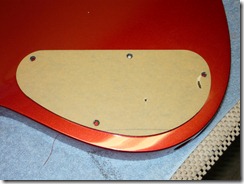 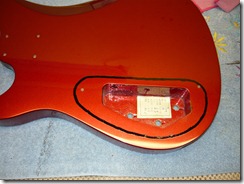 I don’t own a router but I do have a Dremel. I used a  router bit and was able to remove the unnecessary material from around the control cavity with little trouble. 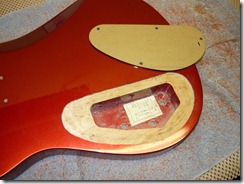 After dry-fitting the cover so that we could drill holes for the screws, I decided to paint the fresh wood to match the rest of the body. It just seemed like a nice touch. 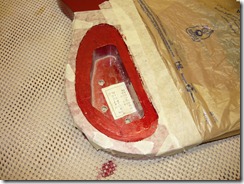 Next we turned our attention to mounting the bridge. There was a hole near the middle screw for a bridge ground but it wasn’t drilled through to the control cavity. Now, a guitar body is not that thick, maybe 2 or 2 1/2 inches but the control cavity is not in the middle of the guitar. It’s all the way to one side. The hole for the bridge ground has to be drilled at an angle, a very slight angle. This takes a very long, thin bit – that I don’t have. Luckily I learned a trick where a segment of coat hanger can be used as a make-shift drill bit. You just have to snip one end at a slight angle to create a very sharp point.

So my son and I did some guessing at what the angle should be to go from the bridge to the control cavity and we put our make-shift bit to use. Well, we got really lucky. We came out about 3/4 of an inch short of the control cavity but still within the area that I had just routed out. I broke out the Dremel (I love that tool!) and cut a channel from the hole into the control cavity so that the cover would still lie flush. 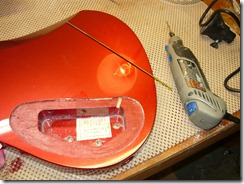 To mount the bridge, I ran a wire from the control cavity, through the new hold, and folded one end into one of the screw holes. We then aligned the bridge and popped in the back screws. Our bridge required that we drill two new screw holes in the front. The original bridge used only five screws, ours required seven. 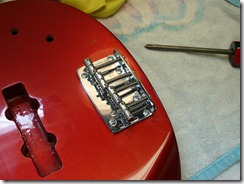 We could turn our attention to the electronics now that the the body work was completed. And that will be the topic for the next post in this series.