This is the third post in a series describing the construction of a bass guitar. This is a project that my son and I took on when he stumbled into the opportunity to purchase a Jackson Bass Guitar body and neck for a pretty good price.

I’d like to describe the installation of the electronics in this post. Unfortunately I don’t have as many photos as I would have liked. In the previous guitar build, I has easily spent 80% of the time on refinishing the body. Now the body was done and the rest would be easy; pop in the pickups, insert the potentiometers, throw in some solder in strategic places and BAM! Sound.

Or so we thought.

For pickups we went with EMG Selects. EMG makes good pickups and Stewart-MacDonald had them at a good price.

We unpacked the pickups and did a dry-fit. This is where the problem began. The routing for the pickups was much deeper than the pickups themselves so the they fell to the point where they were flush with the guitar body. 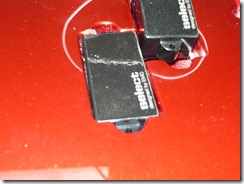 The Fender support site recommends a pickup height of 7/64” on the bass side and 5/64” on the treble side. We tried using a piece of wooden pencil but that wasn’t high enough. We then tried cutting a shim from a scrap block of wood but that also wasn’t giving us the right fit.

I remember from the previous build that the pickups were mounted in a spring loaded housing. I went scurrying around the house looking for pens to steal the spring from. All I could find were three pens. I needed eight.

I them remembered that my wife had just purchased a new hair dryer because the previous one had burned out. (I bet you’re thinking “Where the hell did this come from?” Well, what is the heating element in a hair dryer? A couple of coils wrapped around a tube. What is a spring? A compressed coil. ) I rushed upstairs to grab the old dryer out of the recycle bin and proceed to dismantle it.

I unwound one of the coils and cut it off the tub. It was then easy enough to cut the eight springs that we needed. 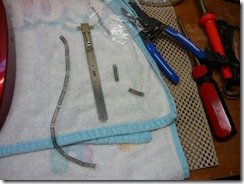 We threaded the mounting screws through the pickups and through the springs. Then popped them into the routings in the body. The springs gave the right amount of lift so we were able to get the recommended height.

Note: When reciting this story to one of the instructors at the music school where my son takes lessons, he mentioned that some builders us foam padding under the pickups to achieve the same effect. That probably would have been easier if I had some laying around.

With the pickups mounted, we mounted the potentiometers for the volume and tone controls. 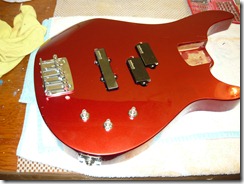 If you’re interested in building a guitar, don’t let the wiring portion of the project scare you. In my opinion, dealing with the body and paint is much harder than the dozen or so solder connections that you have to make. Even getting all the parts is easy if you purchase a wiring kit. For this project, I purchased the wiring kit from Stewart-MacDonald. It comes with three pot, the capacitor, jack, wiring and a wiring diagram.

Here’s the wiring diagram that we used:

This is really an easy project for someone that has never used done any soldering work before. The only difficulty might be in the tight workspace of the control cavity. Just remember to cover as much of the guitar’s body as possible in the event of any solder drips.

Unfortunately I don’t have any pictures of the wiring work. I will say that it didn’t take long for my son to burn himself on the soldering iron. Also, here’s a tip: periodically run the tip of the soldering iron on a foam sanding block. After a while, the tip will become covered with a layer of residue that prevent interferes with heat transmission. The sanding block removes the residue quickly. It will make the work good much faster and easier.

Once the wiring is completed, we used a multi-meter to check that all the connections where good, including all the grounds. We then mounted the jack into the jack-plate and screwed it to the body. Now it was time to hook the guitar to the amp and test everything.

We used a nickel to gently tap each pickup to verify that it was producing a sound. Everything worked as expected.

Now that the wiring was completed, we could finish the rest of the body work. That included installing the control-cavity cover, the strap buttons, neck, tuners and the nut.

I purchased a nut that was pre-cut for a four-string bass guitar. To install it I cleaned up the area where the previous nut had been. We then installed the two outer strings to help position the nut correctly. A thin layer of glue is applied to both the neck and nut, and then the nut is clamped into position. 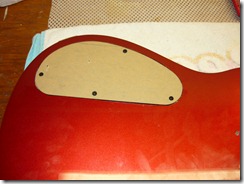 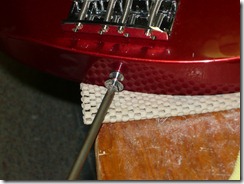 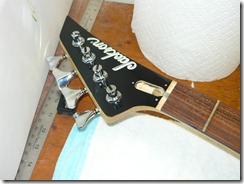 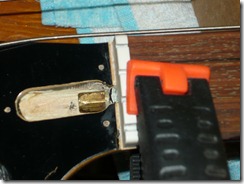 All that was left was to install the strings and do the setup. As you might expect, that was the start of a new adventure. I’ll save it for the next post.